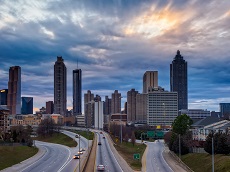 Sample of Atlanta area IT job opportunities for which we are recruiting:

The National Forest Service has recognized Atlanta as “the most heavily forested urban area in the country” and with all of the magnolias, Southern pines, oaks, dogwoods and other trees covering 47.9% of the city, it’s natural that Atlanta leads the nation with the title of “City in a Forest.” Atlanta is home of Hartsfield-Jackson Atlanta International Airport, which held the title of “world’s busiest airport” for many years. Atlanta is becoming the next Hollywood with many projects shot in the city including, The Hunger Games, Zombieland, Driving Miss Daisy, The Walking Dead, Captain America: Civil War, Ant-Man Furious 7 and Guardians of The Galaxy 2. Atlanta is home to major sports teams including Atlanta Braves, Atlanta Hawks and Atlanta Falcons.